As published in PV Magazine June 2020

Until recently, PV plants were designed and developed to last as long as the incentive schemes underpinning their business models – feed-in tariff regimes and green certificate programs, in particular. Such schemes generally provided for a period of 20 to 25 years and the horizon of developer business models was set to match this. But as solar has matured and costs have fallen, longer operational periods are becoming the norm, argues Christophe Campistron, a partner at Everoze.

The dramatic reduction of PV technology costs since 2008 has changed the perception of solar as a source of electricity. It is now one of the most competitive sources of power, if not the cheapest one in many regions – meaning that it is no longer reliant on government-subsidised revenue streams. For existing and future assets, the value of the projects is increasingly being managed on an extended life basis, with asset life assumptions going well beyond the usual 20-year subsidy term. Investors are reshaping their strategies to plan for 35 to 40 years of commercial operation, with some even considering 50 years in North America. This new perspective opens a series of questions. What is the current status of the solar assets, how old are they, and what can we learn from them? What are the technical and non-technical drivers that matter when considering a longer operational period? Which assets should be selected for life extension? And ultimately, just how far could the operational life of a PV asset be pushed?

At present, very few solar PV projects have reached the end of their operational lives. While solar has been deployed since the early 1970s, it was only after the year 2000 that it really started to develop on a large scale, with early adopters like Germany and later other European countries from 2005 onwards. Taking the United Kingdom as an example, the chart on page 48 shows the age of all large-scale solar projects built until 2017, as extracted from the Everoze LEAF Portal. The oldest projects are currently between eight and nine years old and the average is around five years.

For asset managers, lifetime extension is not currently a priority because of the relatively youthful nature of most sites. Of more immediate concern is the need to rectify defects that were caused by hasty construction in the rush to meet subsidy deadlines. Despite this lack of technical focus on life extension, commercial pres- sure on investors looking to secure PV assets in a sellers’ market has led to upward pressure on valuation assumptions – crucially, including the inflation of assumed asset life. Furthermore, in the subsidy-free space, the economic case for solar can be marginal at best and increasing the asset life assumption is one way to turn a non-viable investment into an apparently viable one by simply adding a few columns to a financial model spreadsheet.

It is important to mention that the way existing assets were developed can teach us a lot about future challenges and issues. When subsidy programs were developed, the rapid decline in solar’s price was not anticipated, resulting in harsh FIT reductions with hard deadlines. This led to an acceleration of construction and commissioning from some projects to meet those deadlines – sometimes resulting in unfortunate impacts on quality. As a result, many hurriedly constructed PV assets are already presenting premature asset integrity issues: accelerated ageing of cables, leakage current, early ageing of modules, and/or inverter failures. For these assets, while the 20-year threshold is still far from sight, rectifying these technical issues provides valuable insights on the challenges that will have to be addressed, perhaps repeatedly, through an extended life of up to 35 or 40 years. 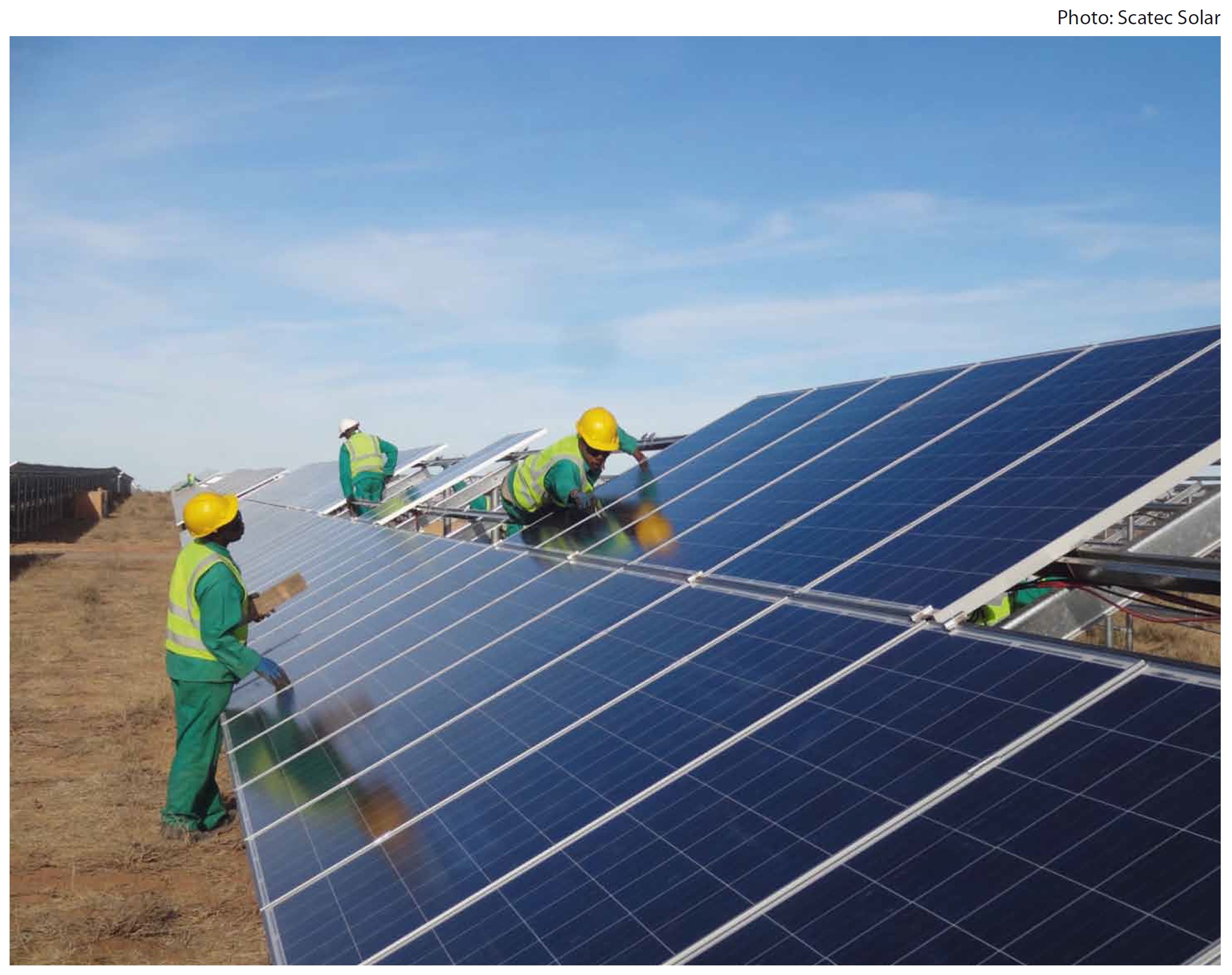 Most PV projects were developed with feed-in tariff contracts and operating lifetimes of around 20 years in mind. However, today the market is considering longer lifetimes for such installations – typically 30-40 years.

Of primary importance are the solar modules themselves, which remain the largest capital element of a PV plant. The efficiency and reliability of PV modules has increased steadily over the past 15 years. This has allowed the product warranty term to increase from a typical term of five years to 20 years in today’s market. How- ever, over the past decade, multiple module manufacturers went bankrupt, leaving their clients with no support or possibility to claim on existing warranties. Even with longer warranty periods, it is reasonable to assume that a significant proportion of module replacement will be needed well before year 40. Some batches of modules in existing PV assets, from manufacturers that have since departed and others, have shown signs of early ageing – causing plant operators to consider re-powering relatively early in asset life. As an upside, the economic benefit of new innovations becomes available sooner than expected. Chief among these is bifacial technology, though the racking system may need significant reshaping for this type of re-powering.

The rapid pace of PV module development also poses challenges, with PV modules from five years ago now obsolete and no longer in production. Depending on the plant configuration, there are two options: partial or complete replacement. For instance, modules connected to one inverter may be totally renewed, with broken or under-performing modules sent for recycling and the good ones kept as spares. With the increase of efficiency, fewer new modules will be needed to achieve the same capacity, and the higher efficiency ratings of modules will deliver more kWh per unit of available land, leading to better returns for investors. But this also raises secondary questions, such as the compatibility of the inverters, supporting structures, cabling and protection system, and regulatory compliance concerns where tariffs have been awarded based on a fixed plant capacity. 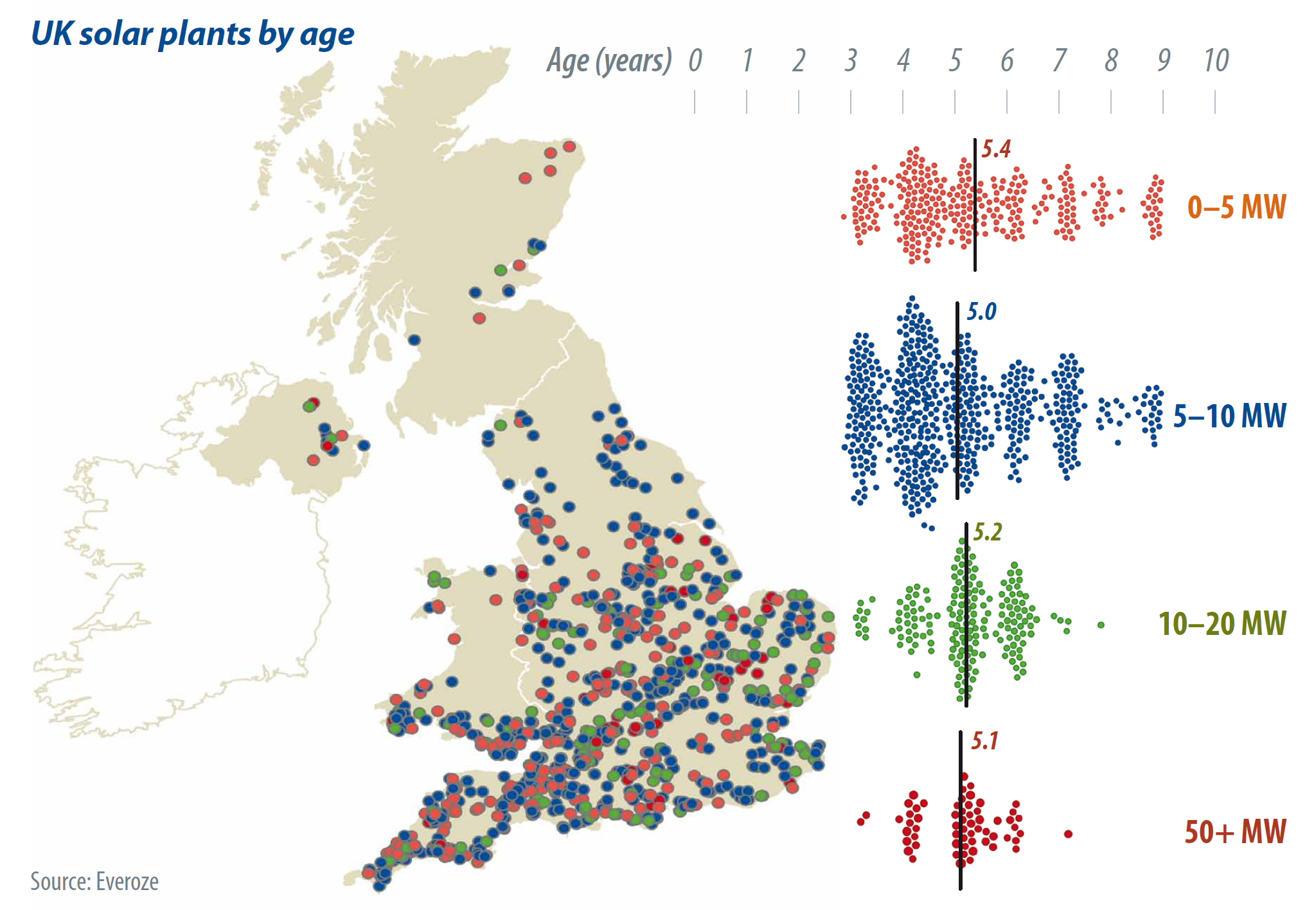 The evolution of inverters themselves has developed as rapidly as modules. Ten years ago, a 100 kW inverter was considered a central inverter, whereas this would now be considered a string inverter, requiring a totally different approach to cabling, voltage level, power management, and monitoring. Conversion efficiency has increased as prices have come down. Modern inverters are now capable of delivering services for network compliance. This may make viable the replacement of all inverters.

The life expectancy of inverters is shorter than for the modules. Even for a 20-year business plan, at least one inverter replacement should be assumed. Forty years of operation will certainly lead to two to three replacements.

Cabling and interconnection is another important point of consideration. The DC cables and combiner boxes will certainly need to be replaced during a typical project life, either because of degradation or because of an inverter change. Further- more, many existing plants present insulation issues that require partial or total re-cabling already – the main reasons being the poor quality of the cables, or the use of incorrect connectors or poor cable burial – notwithstanding the move from 1,000 V DC to 1,500 V DC. On the AC side, some adjustment may also be needed, even though the medium-voltage (MV) cabling would not necessarily need to be replaced if properly executed originally.

On the MV side it is important to also mention transformers and switch gears. Should they be well maintained, properly housed and designed correctly, the largest proportion should last for the bulk of asset life. Yet it is important that a budgetary allowance is made for replacing the failing parts through to year 40. CCTV, alarm systems, and monitoring platforms are unlikely last for a project’s lifetime and will need complete replacement at least once. The mounting structures may also need repair, upgrade or replacement, depending on their status and the type of modules installed if re-powering is chosen. A very simple indicator on structure should be corrosion. After only a few years, some PV systems show significant rust marks, triggering concerns about long-term durability. And it is likely that pile sampling at a sufficient depth for corrosion will be mandatory even if the external parts of the structures are not showing any signs of significant wear. Depending on the situation, civil work may be needed to maintain access and internal roads or other works. Typically, a project in the south of France in a hilly area with significant rainfall, for example, will require much more attention than a flat site in other areas.

While these different aspects may appear to be an expensive to-do list, asset owners can take comfort from the rapid cost reductions seen to date in the industry. Originally envisaged maintenance budgets were set at a time when equipment procurement costs were significantly higher than today, and can cover some of the increased maintenance bur- den associated with lifetime extension. Furthermore, assets tied into expensive maintenance contracts have the opportunity to reduce operational solar PV costs through re-tendering, or by creating additional budgets for maintenance requirements throughout a solar PV installation’s total lifetime.

All technical options carry a cost that has to be taken into account in any extended life business case alongside other, non- technical considerations, such as whether it will be possible to operate a specific asset after the end of the subsidy period, including extending land leases and planning consent. Extending a grid-connection agreement is not likely to be needed, as most connection agreements are indefinite, but technical requirements are likely to have changed. The potential role of co- locating energy storage to address any network constraints and provide other services in support of an extended life business model also becomes relevant at this stage.

Perhaps the biggest commercial uncertainty for extended life PV business mod- els is related to the future electricity price. The off-take value over a 15 to 20-year period and how such energy can best be brought to market over this time frame is highly uncertain. Will environmental regulation flavor the extension of operation or will it be more viable to dismantle the installation?

There is no one-size-fits-all approach to addressing these issues, which is why the extension of life of existing assets must consider multiple factors in a holistic framework. In this respect, the wind industry can be a source of inspiration for solar. Some sites are now more than 20 years old; a number of such projects have already been re-powered, or their lifetimes have been extended. The range of scenarios encountered within the wind industry may provide guidance on how things will eventually develop in solar.

In spite of all those open questions, it is clear that a decision on life extension of  an asset to 40 years will require intensive preparation work. Good knowledge of the assets will be necessary as a starting point to make informed decisions. Ensuring long- term security and safety of operation will be necessary. Securing investment and off- take will also be key. Everoze has proposed its LEAF methodology to assess the various aspects to be assessed in the life extension process. While future technological development in the PV sector is near impossible to predict, it is clear is that both significant risks and opportunities will emerge as 40 becomes the new 20.