Blessed with strong solar irradiation, the Iberian peninsula is emerging as a test bed for subsidy-free solar. But in Portugal the pace of roll-out is being limited by grid bottlenecks – Everoze explains all…

Think of renewables in Portugal, and you’re probably picturing wind turbines. At 5,313 MW, the installed capacity of wind is ten times that of solar, in large part stemming from the country’s status as a wind pioneer early this century.

But this picture is fast-changing. Portugal aims to hit 55.3% of renewables-generated electricity by 2020, up from 50.9% today [1]. And it looks like that shortfall will have a distinctively sunny flavour.

The taste of subsidy-free solar

See a summary chart below for the latest stats. 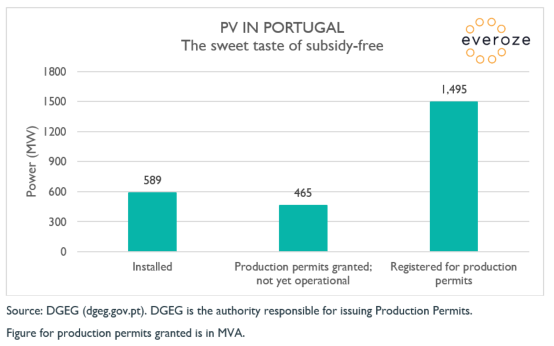 What’s striking here is that this pipeline is not driven by support payments. Feed-in tariffs for solar were axed in 2012, and today all projects are being licenced under a subsidy-free scheme (Decreto Lei 215-B/2012).

But there’s a problem. REN, the grid operator, faces a huge challenge in accommodating so many new solar generators – with regions such as Evora and Estremoz already seeing bottlenecks. So much so, that the government has put in place a lottery scheme (sorteio) to award future permits for areas where grid lacks capacity (Portaria n° 62/2018). The 1.5 GW pipeline in the graph above will go through this process.

The good news is that REN has a strategy. In June 2017, the grid operator unveiled a €814M investment plan running until 2027 to improve grid infrastructure. This plan is reviewed every two years and has been approved by ERSE, the regulator, last month.

The bad news is that the plan assumes only 1.3GW of extra PV capacity is connected: this is less than the current Production Permits queue, without considering new requests.

But with challenge also comes opportunity. At Everoze  we can’t help but wonder if there are more creative options for REN to explore here, to get even greater value for money – and ultimately connect more solar.

For instance, what is the potential for batteries and demand-side response providers to act as virtual power lines, providing a non-wires alternative to network upgrades? And how might more flexible grid connections help? With some creative thinking, there’s potential here for REN to act as a trailblazer for innovation.

If that seems a little far-fetched, it’s worth remembering how quickly non-traditional solutions can take hold. Take batteries as an example. The UK and Germany have already seen a splurge of battery frequency response projects, saving system operators hundreds of millions. The Island of Ireland is going one step further: procuring services from batteries that require speeds of response of <300ms. And at Everoze we suspect that we may see batteries being deployed alongside some new-build European renewables projects as a cost-effective means to meet new EU grid code 2016/631 requirements.

So: the climate for subsidy-free solar looks positive in Portugal – but how quickly this solar pipeline flows will be determined by investments in grid infrastructure, whether conventional or non-traditional. Everoze is excited to be contributing as technical and commercial advisor. Some of you will have seen our recent job ads in Iberia: we’re looking forward to expanding our local presence and working with more of you.

With thanks to Felicity Jones and the wider Everoze Iberian team for contributing to this piece. 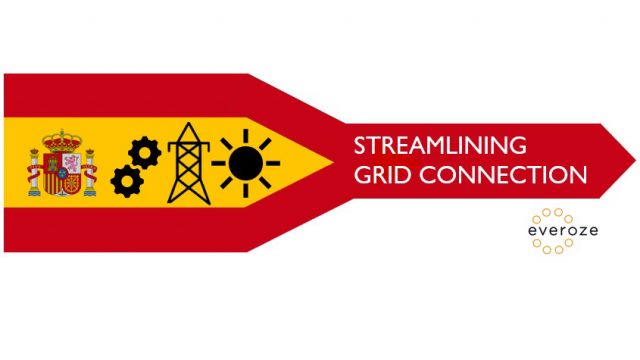 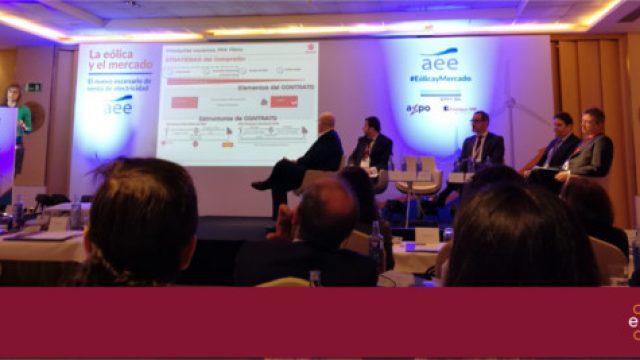