As published in PV Magazine in October 2022

High gas prices have pushed ammonia prices sky-high, reaching $1,600 per ton. At this price, by the end of its contract in 2035, the Beatrice offshore wind farm in the United Kingdom would be more profitable producing green ammonia than electricity if the capture price for electricity is below $114/MWh. David Thomason highlights how designing renewable energy projects for diversified revenue streams such as green ammonia can allow them to capture high electricity prices today, while protecting them from cannibalization tomorrow.

Half of the world’s food production relies on ammonia fertilizers, according to the International Fertilizer Association. The standard Haber-Bosch process transforms hydrogen and nitrogen into ammonia. But this also emits large amounts of CO₂ as 96% of the hydrogen used today relies on fossil fuels, per the International Energy Agency. In fact, 3-5% of the global supply of natural gas is used for ammonia production.

Decarbonization and sustainable development requires a reduction in the use of ammonia in agriculture due to its environmental impact. This will take time as governments need to ensure they can feed their populations. But there are new potential uses for ammonia such as energy storage and low-carbon liquid fuel in the shipping industry. So, if Europe is serious about weaning itself off Russian gas, improving food security in the short-term and cutting carbon emissions, then scaling up green ammonia production may prove vital. And high ammonia prices could provide an incentive to do so sooner rather than later.

The potential benefits of investing in green ammonia production will likely only increase as cannibalization impacts the wholesale price for renewable electricity. The cannibalization effect occurs when renewables of the same generation profile produce simultaneously, depressing wholesale electricity prices. This effect is market dependent; although both wind and solar are affected. Modelling can help investigate the potential role of green ammonia in protecting renewable projects from cannibalization. For my master’s thesis, I built a model of the Beatrice offshore wind farm to understand if the operators should invest in a green ammonia facility at the end of their CfD period in 2035 or sell the electricity to the grid and accept merchant risk and the effects of cannibalization.

The green ammonia facility model uses all the electricity produced by the Beatrice wind farm to supply the electrolyser, sized at 80% of capacity. The electrolyser then feeds hydrogen into a compressor, which then moves to a holding tank sized to provide a constant supply of hydrogen to the Haber-Bosch reactor for 8,000 hours per year. The air separation unit provides the nitrogen feedstock by separating it from the oxygen in the air. The nitrogen and oxygen then react together to produce ammonia. The electricity supply for the air separation unit, the compressors and the reactor is assumed to come from the grid to provide a secure 24/7 supply. 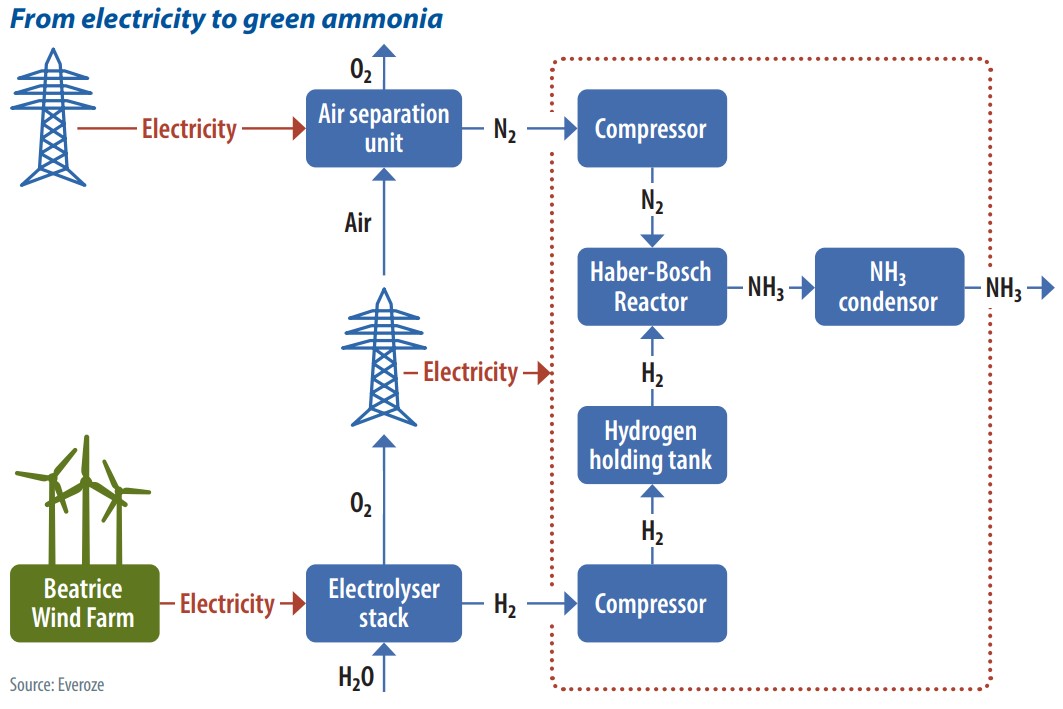 I then costed the green ammonia production equipment capex and estimated opex for the plant. Once the full project economics had been assessed, a discounted cashflow analysis allowed me to understand the value of the electricity for a given sale price of ammonia, once the facility costs had been accounted for. 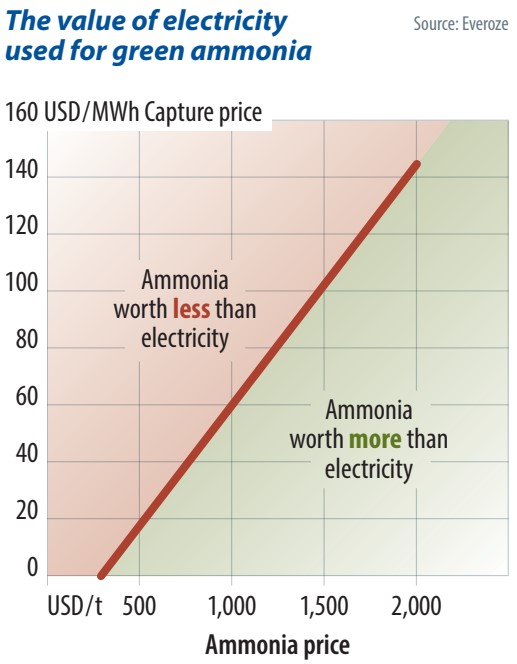 The resulting graph provides a clear method to assess whether the market conditions are right for the Beatrice offshore wind farm to invest in a green ammonia facility for 2035. The business case depends on the capture price for electricity and the price of ammonia. If the market expectations sit below the line, then green ammonia will be more profitable than electricity on the wholesale market. For the current ammonia price of $1,600 per ton, investing in a green ammonia facility would be justified if the capture price is below $114/MWh.

However, both electricity and ammonia prices are closely linked to the price of natural gas today. Hence, the high natural gas prices have also caused the average UK wholesale price of electricity to rise to $200/MWh over the last year, which means with the current market conditions, the business case for green ammonia does not stack up. Today, high gas prices do not necessarily mean investing in green ammonia is a clear winner, but if the link between gas prices and renewable electricity capture prices were broken, the economics would likely swing in its favour.

In some countries, the price of gas and electricity has already been decoupled. Due to the ongoing energy crisis, governments are looking for mechanisms to recover excess profits from energy companies and reduce energy bills for consumers. Spain has capped the price of gas used for electricity, which means the high price of natural gas will no longer drive up the capture price for renewable projects in the same way. Similar conversations are happening across Europe; this includes the president of the European Commission, Ursula von der Leyen, announcing that the EU’s electricity market “does not work anymore”. If more countries implement market reforms which break the link between the wholesale price of renewables and natural gas, then high gas prices would directly translate into a stronger business case for green ammonia projects.

As more renewable energy projects move to merchant models and the energy crisis accelerates the deployment of green energy, the impact of cannibalization on revenues will grow. Developers and investors should consider, right from the beginning, how to prepare their renewable assets for diversified revenue streams such as green ammonia production.

The green ammonia industry is still in its infancy and its success will depend on state subsidies and further technological and sustainability improvements. However, a renewable project with the ability to pivot to green ammonia or green hydrogen would be able to capture high wholesale electricity prices today, while retaining the flexibility to protect itself from cannibalization and low capture prices in the future. 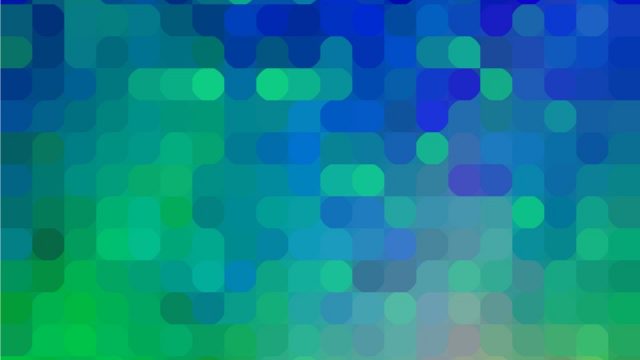 Everoze was proud to add our signature to the recent Renewable Hydrogen Coalition letter to the European Commission and wanted to set out our views on the role of grid connected electrolysis. In his latest article, Everoze Partner David Woodhead discusses our reasons why. 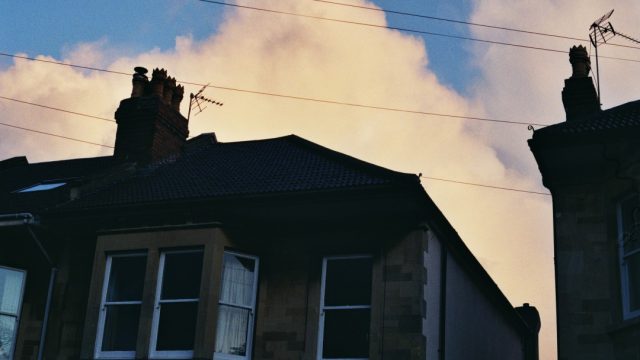 Realising the value of reducing electricity consumption in the home

In his previous blog, Benjamin Lock wrote about how energy efficiency can help avoid distribution network constraints, and why this unglamorous yet effective technology deserves more attention. Now it’s time to get a bit more specific. How much is domestic energy efficiency actually worth? And how do we unlock its potential? 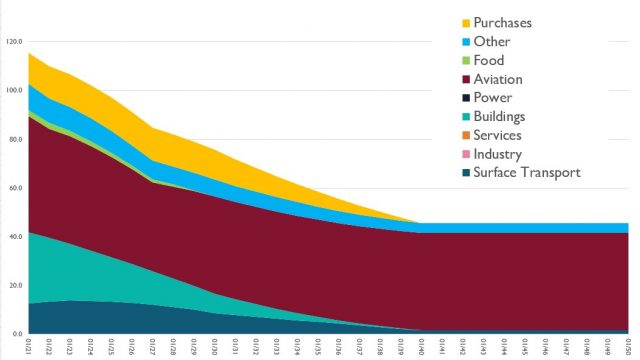